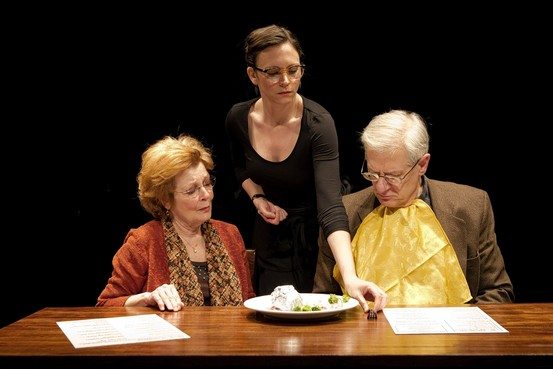 Last week I had the privilege of seeing one of the latest plays at the Playwrights Horizons theater. “The Big Meal” proved to be one of the most unique and interesting plays I have seen in awhile.

Aside, from being a family drama that everyone can relate too… The Big Meal took the audience on a journey unlike any other.

Without giving too much away, I loved how each character literally transformed before our eyes into another role. This is a fast paced, no intermission show and anyone looking to be challenged and on the edge of their seat should definitely give this a try! There was a point after the 1st half where I yearned for the choppiness and peppiness of the first half, but everything came together in the end and I left completely satisfied from my Big Meal.

The small cast was outstanding, including Broadway veteran Anita Gillette whom I’ve had the honor of seeing perform before. Even the children played their role to the fullest. With the small intimate Off Broadway feel of the theater, you were literally a part of the characters dialogue and feelings. I have already recommended this play to many people and will continue to do so!

I think what I liked the best about this play was that it made you think about the moment you met your husband or partner. What will happen to your lives in the next 20, 30, 40 yrs??? Who will enter and who will leave? Who will stand by you and who will wonder off? What life will you build together? What will become of your children and their own families??

Thank you to Mama Drama & Playtime for an amazing recommendation! I know some of you would love to see the play but might have little ones and no one really wants to leave them at home.  Mama Drama turned me on to this amazing service Playtime which is much more then just a baby sitting service.  Here’s a little bit about Playtime…

About Playtime!
Playtime! is the first program to provide childcare during theatrical shows in
NYC. The inaugural Playtime! event took place in the Spring of 2011, after
crucial funding from the Theater Sub-district Council and a partnership with
Sitters Studio allowed Playwrights Horizons Managing Director Leslie
Marcus to make this long-time dream a reality.
Marcus, who is a mom, and Playwrights Horizons staff members realized
that the combined cost of theater tickets and child-care is the factor most
often cited by people with young children as the reason they rarely attend
the theater. Playtime! was established to bring parents back to the theater
by providing excellent childcare at (or steps from) the theater at an
extremely affordable rate. The service is available to any type of ticket
buyer for participating shows, regardless of the price paid for the ticket,
and is just $15 per child. Sitters Studio is fully bonded and insured, and
their rigorous background checks and training ensure that they provide not
only an artistic and fun experience for children, but also one that complies
with top-notch safety standards.
The hope is that this program will become a model for other performing
arts organizations. In August of 2011, the Westside Theatre (current
shows: Love, Loss, and What I Wore and Rated P for Parenthood) and
Signature Theatre Company joined with Playwrights Horizons, allowing
their patrons to participate in Playtime! as well. More venues and
companies will be joining soon.
Currently, Playtime! is available for children ages 4-12 and mostly takes
place during weekend performances.

These two were all smiles at @strattonresort over

This weekend at @strattonresort we all felt like W

Yesterday after school I surprised the girls by ta

I ended the year with these lovely ladies for a fu

I was lucky enough to end the year with a little #