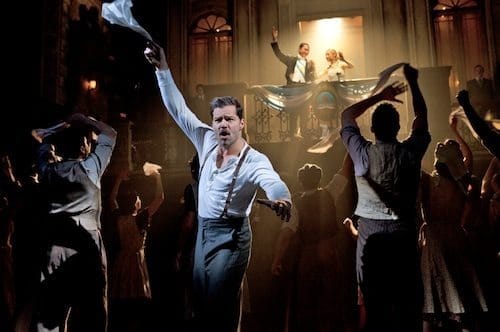 Who was Eva Peron? A small town girl who became a Saint? For those who are curious and looking for a spectacular show, I have one word…EVITA!
Admittedly I was already obsessed and owned the soundtrack since college, so I was more than excited to go. Evita on Broadway is special for so many reasons…. 1) Ricky Martin, yes RICKY Martin! 2) Ricky Martin, oh wait I just said that 3) Yes…. Him again!
Ricky was cast perfect as the eyes and ears of the show … Narrating in song such a detailed story. The life of Eva Peron is brought to the stage by the fabulous Elena Roger who sings and dances her heart out night after night. Although, a tiny lady, she portrays this Argentine legend with such power in this amazing production. Everything about this show is top notch. The cast and ensemble are terrific too. This is a true Broadway performance with singing, dancing, and a little bit of everything.
Michael Cerveris who plays Eva’s husband is equally talented and delivers one strong number after another. An A list cast does not always deliver the best on stage, but in this case it does!
My only fault with this play was the end…. I needed a little more time to wrap up and mourn Eva’s passing but I do believe this is exactly as she would have liked it to end. Don’t cry for me Argentina.

“The Center of the Universe” ... virtually emp

Our #nyc pace has been halted indefinitely and we

Is anyone else feeling confused? For instance, how

With the world turned upside down this morning fro

On our recent trip to the @metmuseum I tried expla

Last week I had the opportunity to go on my first

With all the talk about #coronavirus I have to thi

“She remembered who she was and the game CHANGED

Last weekend our time at @smugglersnotchvt was suc