New York City has been returning to normal slowly and safely since the Covid-19 pandemic.  Re-openings of our favorite places are super exciting as they happen one by one, but I think we can all agree THEATER is one venue we are still anxiously awaiting.

While we know it will happen soon, creative minds can still enjoy online performances until we attend in person again. The New York City Children’s Theater is a place I’ve taken my kids to in the past and I’m thrilled to announce they’ve produced some outstanding virtual performances for kids, along with their parents, to enjoy!

As an adult, I have the luxury of connecting with my online community with people all over the globe. With more time on my hands this past year to indulge in social media, I found our world really isn’t so big after all. Although we live oceans away, speak different languages and look different we have lots in common. We strive to be kind and make sure our friends and family are cared for and healthy.

The New York City Children’s Theater has a wonderful online performance called “Same, Same, But Different”.  Based on the award winning book Same, Same, But Different  written and illustrated by Jenny Sue Kostecki-Shaw comes a story we can surprisingly all relate to. This entertaining zoom performance, an adaptation from Barbara Zinn Krieger and Maximillian Gill, follows El, who lives in America, and Kailash, who lives in India. As part of a class assignment, these characters  become pen pals, and learn although their worlds are very different they are also the same. My kids have felt isolated this past year. With challenging situations like distance learning, and coping in a small space, we have battled it all. When my girls watched this colorful performance online, they were reminded that everyone has similar obstacles in life and could relate to this story. Whether it’s a younger or older sibling who we love but sometimes just find annoying,…they get it!

The New York Children’s Theater helps to create relevant topics like having “emapathy” for one another and welcoming difference in this thoughtful performance with six characters. Even though we are from different countries we can have lots in common which brings our worlds closer together in ways.

With a run time of 45 minutes and geared towards 3-8 year olds, this performance of Same, Same, But Different is a excellent choice for little ones to enjoy. For only $20 you get unlimited access to the online performance plus a ton of pre and post show activities. My girls loved listening to the characters before the show and I loved hearing the directors interpretation of the performance and the behind the scene details. For your own kids who now want a pen pal, there’s a really cool download  to write their own letter that can be emailed to the theater with a reply letter guaranteed. Click here to find showtimes and tickets. Now through May 31st.

The Traveler is another virtual production now streaming at the New York City Children’s Theater through May 31st as well. This silent performance tackles the common issue of separation which many of us are discussing. As we all know these can be a heavy topic and sometimes it’s easier not to have a conversation with kids, but after seeing this performance our family started a dialogue. 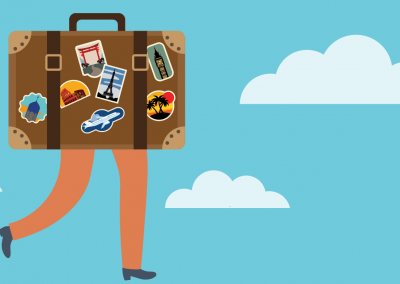 My girls were a little thrown off at first by this performance of The Traveler Mime is not a genre of theater they are accustomed to, and it took a little while for them to understand what was translating on screen. A student of the legendary mime Marcel Marceau, Bill Bowers primarily uses his hands and facial expressions to tell this story. With the use of limited props, it’s really up to the audience to use their imagination by watching Bill use the art of mime.

Listening to the pre show videos, I learned a lot myself while watching with the girls. Apparently we area all mimes every day. Whether you nod you head or make a gesture without using words, these are all things a professional mime would do!

Originally set for the stage more than 3 years ago, The Traveler was intended for a real life audience so the production team had to get creative with the new virtual version. Having the advantage of some extra time on their hands….. the finished product is just outstanding!

Through the use of black and white, color, and sound (which is always exciting to kids)….. my girls were forced to process the performance in a different way which was really fun to see. I loved how engaged they became and how they recognized the sounds of a NYC subway and some popular landmarks which you will have to see for yourself.

The Traveler is unlike other plays since there are no words, but rather a long sequence of moments. As I mentioned, this show tackles some difficult subject matters most of our kids have overheard on the news this past year. Immigration and family separation has become very real, and trying to find ways to explain these subject matters can sometimes be difficult. The Traveler is a modern day story of how people travel thousands of miles in search of a new home and community.

I won’t tell too much about The Traveler since you will want to see it for yourself, but things to ask your kids afterwards are: 1) what if you have to suddenly leave your home? 2) what would you take with you? 3) who would you meet along the way and what connections would you make? 4) what challenges and obstacles do you think you would have?

The ending of this story was not the intended ending for the stage according to the director, Andrew Frank. However, the alternate zoom version was amazing and we were laughing with joy. The Traveler is a story that reminds us we can learn about ourself by learning about others and never shy away from those challenging conversations!

To watch a performance of The Traveler click here.

The NYC Children’s Theater always has such exciting things planned, and I look forward to following along.